Mange is a potentially severe skin disease caused by infestation and inflammatory reactions to mange mites. Our laboratory has investigated mange ecology in multiple different host species where consequences range from individual fatalities to loss of an entire local population of hosts. We have collaborated in the study of newly discovered mange mite species and the epidemiology and ecology of persistent mange in host populations. Our comparative and ecological approach lends itself to asking some interesting questions, such as whether there are environmental or other broad-scale drivers that are underlying mange epidemics in multiple wildlife species.

Between 2009-2011, a devastating fatal mange epidemic virtually eradicated the population of western gray squirrels from the Big Bear region of the San Bernardino Mountains. We worked with local rehabbers, wildlife biologists, and California Department of Fish and Wildlife to reconstruct the epidemic using citizen science reports, monitor the recovery of the population, and describe the pathological characteristics in infested squirrels.

*Come back soon to see our in press paper on tracing the epidemic in Big Bear using citizen science. 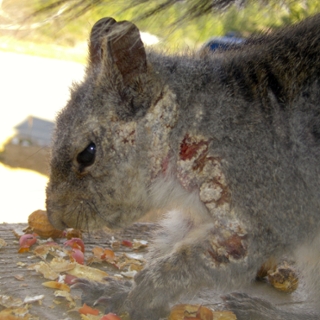 Since 2013, we have documented four confirmed cases and multiple suspect cases of mange in California golden eagles. Although the mite is morphologically similar to an avian mange mite Micnemidocoptes derooi, it appears to be a novel species tentatively named M. raptor. The fact that the disease can be deadly and the severe clinical condition of affected eagles might suggest that this could be the beginning of a particularly virulent outbreak. Our collaborative work involves monitoring for an outbreak, better defining the taxonomy of the mite, and developing diagnostic tools.

This work is the product of a strong collaboration among multiple participating scientists, including Doug Bell at East Bay Regional Parks, Asli Mete at California Animal Health and Food Safety, Miranda Sadar (now at Saskatoon), Michelle Hawkins at UCD School of Veterinary Medicine, and Krysta Rogers at California Department of Fish and Wildlife Wildlife Investigations Laboratory.

Click here for a clinical manuscript on golden eagle mange 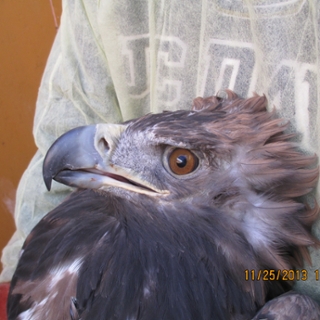 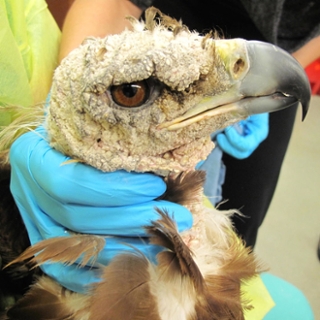 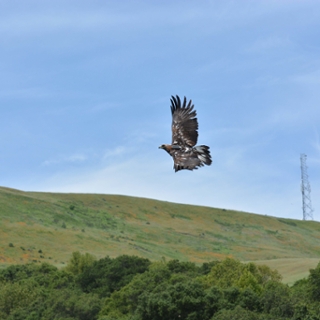 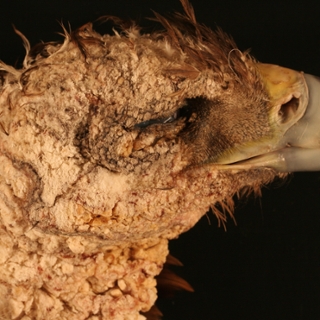 The last thing the Bakersfield population of this endangered kit fox needed was a disease epidemic, on top of continual urbanization, hit-by-car fatalities, poisoning, harassment by other predators, and an unnatural diet of scraps, garbage and junk food. Then sarcoptic mange hit the Bakersfield foxes just a few years ago, spreading to most of the small groups of foxes still making their living in various dirt lots in the city and killing most that get the disease. We work with a team trying to develop new diagnostic tests, understand the extent of the epidemic, rehabilitate and then re-release individual foxes, and stop the epidemic on a population level.

Our study has received funding from the Morris Animal Foundation, Sacramento Zoo, San Joaquin Valley Chapter of the Wildlife Society, Kern County Wildlife Resources Commission, and US FWS who did a great story on the epidemic, here. 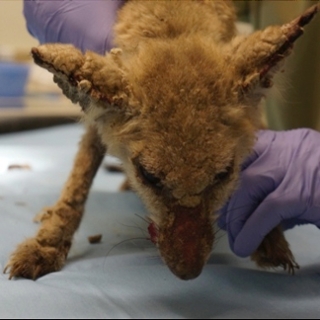 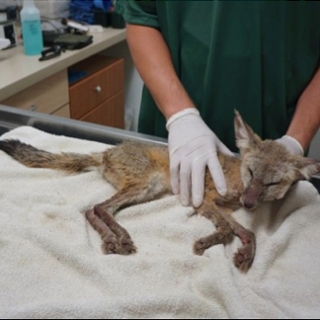 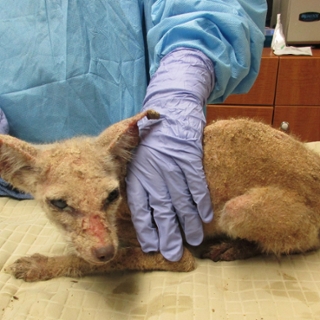 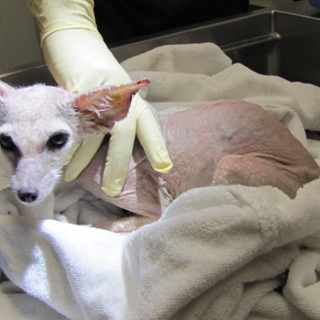 A network of wildlife experts from ESRP, CALM and CDFW responds to local reports of mangy foxes to capture and treat as many as possible. Here a severely affected kit fox is treated at CALM after capture by ESRP. Just one week after treatment started (right), this kit fox is on the road to recovery. Photo credit: Jaime Rudd, UCD/ESRP.

Our group collaborates on extensive studies of mange in bobcats across the state. Mange in bobcats can cause a prolonged death. A devastating epidemic with considerable population decline, was documented in Los Angeles and Ventura County; numerous fatal cases due to mange debilitation were detected in Orange County by Erin Boydston at USGS and collaborators; and in San Diego County by San Diego State University, National Forest Service, and UC Davis researchers. Our lab, in collaboration with California Department of Fish and Wildlife, has supported this research and worked to develop a fecal PCR test (click here for the manuscript) to document mange mites when you can’t capture the bobcat. Ongoing work aims to understand extent and causes of such widespread epidemics.

Other manuscripts we’ve co-authored include a review of the clinical pathology of mange in bobcats, and a coming paper on how anticoagulant rodenticides and common feline infectious diseases can affect immunity in bobcats and impact the clinical course of mange.

Below: A healthy bobcat (B250) on the left in 2010, and the same individual on the right with an active mange infection in 2011 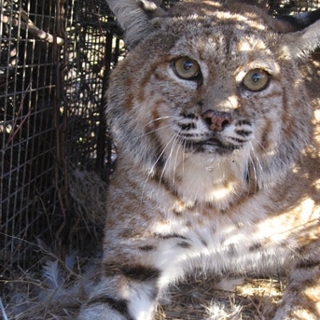 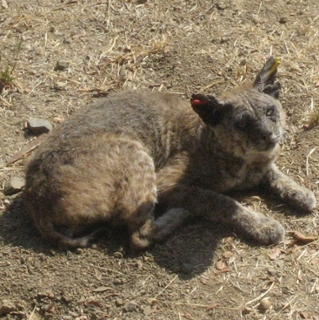